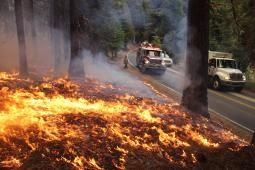 Sonora, CA — A new research study looks at how the Rim Fire burned differently in areas that recently had fire in the landscape, as opposed to areas that had largely gone un-burned in past years.

It found the fire typically burned less intensely in places that had recent fires. However, during the few days of the Rim Fire’s largest growth, with the large columns of smoke, there was little differentiation.

“The specific conditions leading to large plume formation are unknown, but what is clear from many observations is that these plumes are associated with extreme burning conditions,” says Jaime Lydersen, lead author of the study, with the Forest Service Pacific Southwest Research Station.

The Rim Fire started in August of 2013 and burned over 257,000 acres. It was the largest fire ever recorded in the Sierra Nevada.

The full study can be found here. (Click on View PDF in the upper right corner)