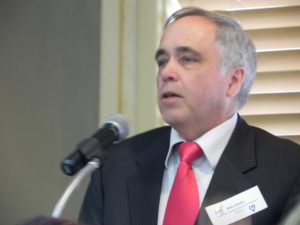 Sonora, CA – He has been a staple in the Tuolumne County District Attorney’s Office for 32 years and on January 5, 2015, at noon, D.A. Michael Knowles will leave that office.

Today, the Tuolumne County Board of Supervisors honored District Attorney Michael Knowles for all his accomplishments, which include serving as a Deputy D.A., Assistant D.A., Acting D.A., and the appointed D.A. in February of 2012.

“Thank you isn’t enough, but thank you,” said Supervisor Randy Hanvelt, “All the best in retirement.”

One person who has worked closely with D.A. Knowles over the year is Tuolumne County Sheriff Jim Mele who, with a shaky voice and teary eyes, gave this heart-felt send-off, “I’ve had the opportunity and privilege of knowing Michael Knowles for 27 years.  He is a man of honor.  He is a man of integrity.  He has always been a friend to law enforcement, and more importantly a friend to me.”

Mele acknowledged Knowles for his tireless work as an advocate for victim’s rights.  The board praised Knowles for being involved in law enforcement teams including the Kids Interview Team, specializing in interviewing children in a “kid friendly” environment, Drug Court, Fire Investigation Unit, which investigates the cause of local fires and securing evidence in arson cases and the Tri-County Narcotics Task Force, which involved Amador, Calaveras and Tuolumne counties.

In his acceptance of a plaque, Knowles thanked the citizens of the county saying, “I think it is our collaboration and our cooperation and it is that togetherness and sense of community that sets us apart.”  Knowles also challenged the Board to “fight the good fight” saying,   “Just because somebody else wants to make us different we don’t have to be.”

Knowles began his career in law working 6 ½ years in the Sacramento D.A.’s office before coming to Tuolumne County.