Volleyball Team Gets Its Day 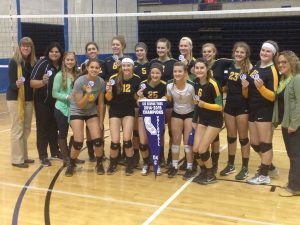 Supervisor Karl Rodefer made the motion, and it was unanimously approved by the five Supervisors. The  volleyball team was on hand at this morning’s Supervisors meeting to receive a certificate of recognition from the county on their state championship win. All of the Supervisors individually praised the team. Supervisor Randy Hanvelt said the team put Sonora “on the map” through hard work and perseverance.

The team received a similar certificate from the Sonora City Council Monday evening.

This Friday there will be a parade in downtown Sonora in honor of the champions.

The Sonora Police Department has released the following information about the route, and street closures:

No parking will be allowed on Green Street between Yaney Street and State Route 49 (Stockton Road) between 1:00 PM and 1:45PM.