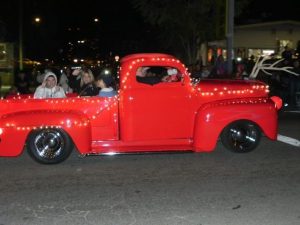 After the storm passes, one of the smaller Christmas parades in the Mother Lode will take place on Friday night. For the residents of Tuolumne City, it is a well-supported annual tradition.

Every year, hundreds of residents and out-of-town visitors line the streets of downtown Tuolumne (around Westside Park) to watch their local Christmas Parade.

It’s a chance for neighbors to come together in an often chilly but festive atmosphere, and cheer for several familiar faces.

“We have over twenty-five entries so far”, said Wano, “and we’ll take new entries right up until the last minute.”

The Christmas Parade begins at 6 PM Friday. In case you miss any of the entries the first time, all of the entries will pass by Westside Park again.. That’s right, this parade is so charming that the parade passes the crowd two times.

The Christmas Craft Fair will also take place Friday afternoon beginning at 4 PM, inside of the Tuolumne City Memorial Hall. The doors will stay open throuh 8 PM. Santa Claus and Mrs Clause will be inside following the parade.

If you are interested in entering either the Parade or the Craft Fair, call 928-1214.