Alert To Merchants And Public 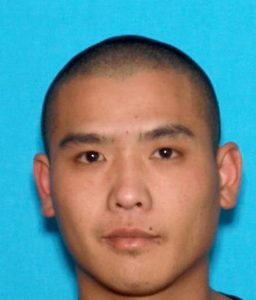 Angels Camp, CA – Angels Camp Police are asking the public and merchants to help catch a man who tried to cash a stolen check at a local bank.

The incident happened on Friday around 4:15 p.m. at the Rabobank in Angels Camp.  Investigators say 29-year-old Hoanh Minh Thach tried to cash a stolen cashier’s check, but left empty handed after a bank employees determined it was not the suspect’s check.

Angels Camp police have put out a bulletin to all local merchants with a picture and description of Thach.  He is described as an Asian, 5’8” tall, 160 pounds, with black hair and brown eyes.  He was last seen with a female accomplice in a white late-model sedan, but the make is unknown.

Angels Camp Police report the suspect is currently on Post Release Community Supervision.  Detectives caution if you spot Thach do not attempt to stop him, instead call 911 and give a description of what he is wearing, his vehicle and license plate number if possible.