No Trial Date For Emerald 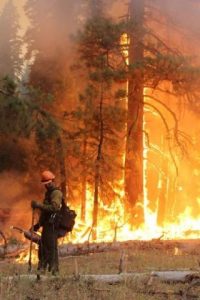 Fresno, CA – A status conference held this morning for Keith Emerald, the Columbia man accused of sparking the Rim Fire in 2013, did not result in a trial date, according to U.S. Attorney’s Office Spokesperson Lauren Horwood.

As reported yesterday, in an October court appearance Emerald’s attorney noted she was preparing a motion seeking additional evidence compiled during the investigation that was not yet provided by the government.  Horwood would not give specifics about the additional evidence, but says those issues were resolved except for one that involved a Forest Service policy, which the government stated it could not find.  As a result, Horwood says, “The court ordered the government to provide a policy from the Forest Service regarding documenting statements made by defendants.”

Another hearing is set for February 9 in Fresno.