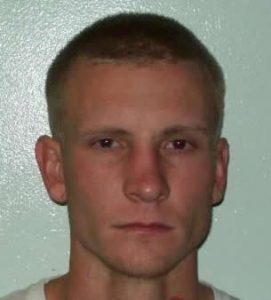 Sheriff Mele says the suspect that died was 29-year Bruce Thomas Snyder, whose last known residence was Jamestown. He was on active parole for assault with a deadly weapon, and legally could not possess a firearm.

A 911 call came in Saturday night that a man had a gun at a residence in the 600 block of Orchard Avenue, in the city limits of Sonora. The Police Department reports that Snyder allegedly threatened a man at the residence. The suspect had left the home by the time law enforcement arrived, but they were able to get a vehicle description. A Sonora Police Department officer soon spotted the vehicle near the area of School Street and Washington Street. Snyder was the only person inside the car. A vehicle stop was initiated, and Snyder allegedly got out of the car and opened fire at the officer. A back and forth gun battle occurred. An innocent female bystander was in the area, and was hurt. The injured person has not been identified, but Sheriff Mele says she was visiting the area from North Carolina. It is not clear if her injuries were from the gun of Snyder, or the officer, as it is still under investigation. The North Carolina woman was shot in the upper torso, was taken to Sonora Regional Medical Center, and has since been released.

After the initial stop attempt, Snyder got back into his vehicle and took off driving. He traveled somewhat in a circle. The chase went down Washington Street, eventually onto Stockton Road, and later back down Washington Street again. By that time, Tuolumne County sheriff’s deputies were also involved in the pursuit. Snyder stopped his car near Theall Street and stepped outside with his gun. “At which time he fired rounds at the Sonora Police Department officer, and Tuolumne County deputy sheriffs,” says Mele.

Two deputies and the officer returned fire. Snyder was shot and killed at the scene. The Sonora police officer was shot in his duty belt, which stopped the bullet. He was taken to Sonora Regional Medical Center, and has also since been released.

Sheriff Mele says the names of the deputies and officer involved will not be released until internal investigations are completed. The three have been placed on paid administrative leave, which is standard practice during any officer involved shooting. Mele said the Sonora police officer has been with the department for seven years. One of the deputies has 21 years of law enforcement experience, and the second deputy had just started in July of this year. He was with a field training officer and in the midst of the training process.

Other agencies involved in the ongoing investigation include the Department of Justice and the Tuolumne County District Attorney’s Office.

The Sheriff says Snyder was unquestionably the aggressor in the incident. “There was no doubt that this man wanted to harm my deputies and the Sonora police officer,” said Mele. “It was provoked by Mr. Snyder.”

Mele says the investigation will likely last several weeks, and more information could be forthcoming. At this point, it is still not clear how many shots were fired during the incident. It is also unknown if Snyder was intoxicated.

Much of Washington Street in downtown Sonora was closed today  because of the investigation. Traffic has since been allowed back through the area.