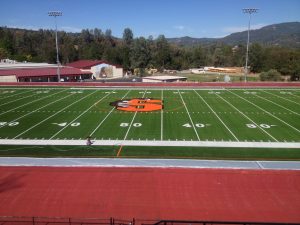 Summerville’s Thorsted Stadium was officially declared open a couple of weeks ago at a ceremony held at the field.

By design, the field and the entire stadium area is made of synthetic materials. Even when it rains, this field  should remain pristine.

Johnstone sees the field almost every day and still says, “It is beautiful. The Homecoming alumni tonight will be amazed seeing this new $4.1 million dollar stadium.”

The varsity football game against Linden begins around 7 p.m.

Johnstone added, “The energy this evening will be incredible. We anticipate that it may be standing room only. There will be floats, the Homecoming Queen Coronation at Halftime, lots of tri-tip BBQ food  as sold by the Future Farmers of America, fireworks and plenty of parking.”