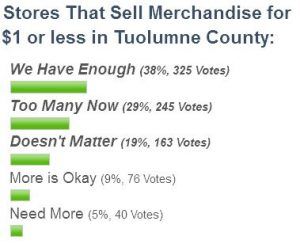 stores that sell merchandise for $1 or less

This week an informal myMotherLode.com poll question asked about stores that sell merchandise for one dollar or less in Tuolumne County. The results were;

The poll ran from October 28th to November 3rd with 849 votes.

There are a few stores in the MotherLode that sell merchandise for under one dollar, including a Dollar Tree in the Junction Shopping Center in Sonora. On September 27th the first Dollar General, which sells several items for more than $1, opened in Jamestown. A permit for a Dollar General store off of Soulsbyville Road was also approved by Tuolumne County Planning Commission on September 18th. The Tennessee based Dollar General has 10,000 stores in 40 states. Dollar Tree is based in Virginia with more than 5,000 stores in the 48 contiguous states.