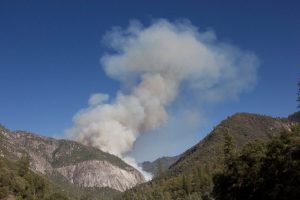 Yosemite, CA – The Dog Rock Fire is 100% contained at 311 acres. Fire officials say that currently crews have completed the rehabilitation of the fire area. In addition, firefighters and fire engines will continue patrolling Highway 140, watching for rolling material and hotspots.

“We’re being very cautious about potential rock falls,” says Park Fire Information Spokesperson Gary Wuchner. “Many of our [vehicle] pull outs are still coned off so people will be reminded to refrain from stopping.”

Wuchner say visitors may see smoke trails coming up from the interior of the fire.

The Dog Rock Fire began October 7. Thirteen-year veteran air tanker Pilot Geoffrey “Craig” Hunt, 62 of San Jose was killed the first day of the fire when his S-2T tanker crashed into a canyon while fighting the flames. Nearly 60 homes in the Foresta Community were evacuated and Highway 140 at the Arch Rock entrance station was shut down for several days. Fire investigators say metal sparks possible from trailer safety chains dragging on the pavement may have ignited the blaze.