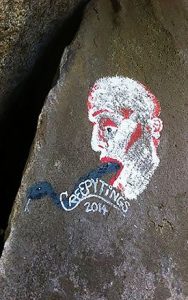 Yosemite, CA — Visitors to Yosemite will not only see the grandeur of nature, but also the work of a graffiti artist.  The vandal has tagged Yosemite and several other national parks in the west with acrylic paintings of faces on rocks.

“The drawing occurred along the Mist Trail near Vernal Falls, says Yosemite spokesperson Ashley Mayer,   “Visitors may notice it for the next couple of weeks, but we are looking to restore that area.”

Mayer could not comment further on the vandalism due to an active investigation by the U.S. Department of Interior.  The Associated Press reports National Park Service representative Jeffrey Olson says the probe stemmed from a post on a California-based hiking blog about a New York woman who traveled across the West posting the paintings on blogs online.

Mayer asks visitors if they see anyone vandalizing or doing graffiti in the park to contact a ranger immediately.

Mayer says, “The National Parks are some of America’s greatest treasures.  They give visitors an opportunity to come into an area that is pristine and experience nature.  Vandalism such as this takes away from that natural character.”

Other national parks also hit by the vandal include Death Valley National Parks in California, Canyonlands, and Zion in Utah and Crater Lake in Oregon.

The vandal could face a federal misdemeanor charge which can be punishable by jail time.