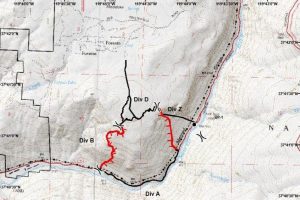 Yosemite, CA – Fire Officials have estimated the containment of the Dog Rock Fire will be Sunday, October 12 at 6 p.m.

The flames remain 54% contained with 311 acres burned.  As the flames continue to decrease, so will the number of resources, including hand crews and engine crews, over the next two days according to Fire Officials.

“Firefighters have done a really awesome job,” says Park Spokesperson Gary Wuchner.  “It’s been really steep terrain, rugged rock and loose scree, which is just rock that is broken and really slippery.  They’ve done a lot of great work, particularly along the edges of Highway 140, which is pretty important to the Park to reopen for visitors to come to the park.”  As reported earlier, the closed section of Highway 140 including the Arch Rock Station entrance will reopen tomorrow at 8 a.m.

All power has been restored to the Yosemite Valley as of late last night.  Wuchner says today fighters will complete mop-up on the north side of the fire and will begin removing hoses, cleaning up equipment and rehabilitating hand lines to reduce the possibility of erosion.  Crews working along Highway 140/El Portal Road will be cleaning up brush and securing any remaining hotspots.  Wuchner reports there will be no night shifts starting tonight.

Tomorrow the current Type 1 incident management team will turn the command of the fire back over to a smaller Type 3 team.  Current resources battling the fire include 465 firefighters and 3 helicopters in the air.