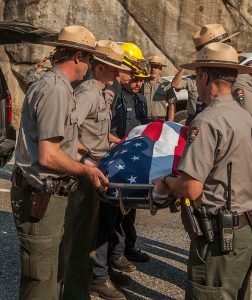 Yosemite, CA — In a ceremony this morning at Yosemite National Park, a National Park Service honor guard returned the remains of pilot Geoffrey “Craig” Hunt to the Cal Fire honor guard.  The 62-year-old from San Jose was killed Tuesday afternoon after his S-2T air tanker crashed into a canyon wall while fighting the Dog Rock Fire.

Hunt was a veteran pilot with DynCorp International of Virginia.  He had flown for Cal Fire the past 13 years.

The National Transportation Safety Board (NTSB) is in command of the crash investigation.  Park Ranger Kari Cobb says, “It could be weeks before we know exactly what caused the plane to go down.”

Hunt is survived by his wife and two daughters.  In honor of Hunt, Capitol building flags remain at half-staff.