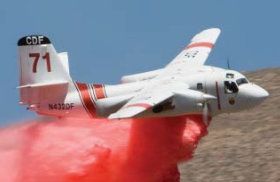 As reported last night, the pilot of the air tanker died in the crash, but his name has not been released. Cal Fire reports National Transportation Safety Board (NTSB) officials are expected at the wreckage site this morning to begin their investigation of the crash.

Cal Fire reports the S-2T air tankers is used in fast initial attack of a wildland fire to douse the flames with retardant.  It can hold 1,200 gallons of retardant.  The aircraft is manufactured by Grumman Aerospace, Bethpage, New York.  Click here to view more details on the plane.