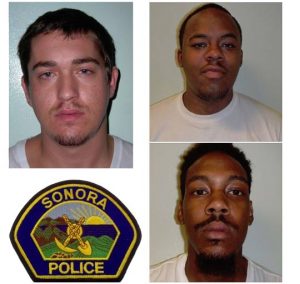 The fight involving the five men ended before police arrived at the Washington Street bar at 2:36AM. When police arrived one of the two victims was unconscious with major head trauma. He was flown to a Modesto area hospital for treatment for the broken bones in his face. The second victim, a friend of the unconscious man, sustained a large laceration above one eye, broken teeth and a broken jaw.

Witnesses told police one of the victims lost a pool game and would not pay the $100 wager. The three men, including the winner, started verbally harassing the loser of the pool game and threatened him to pay up. Allegedly the three suspects, Ronald Votaw, 25 of Jamestown, David Cobb, 24 of Sonora and Nathaniel Duckett, 29 of Sonora, left the bar at closing time. Witnesses say when the two victims exited the bar they attacked. Both victims were reportedly punched, fell to the ground, and then were kicked and hit in the face while they were on the ground. After the attack the three suspects fled the area.

Votaw, Cobb and Duckett were later located by police and arrested for felony battery and assault.