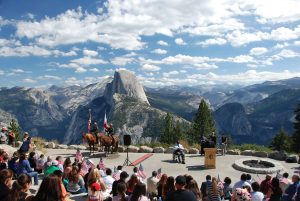 Wednesday’s event was in correlation with Constitution and Citizenship Day, observed annually on September 17th. The ceremony at Glacier Point was attended by Park Superintendent Don Neubacher, U.S. Magistrate Judge Michael Seng, and representatives from the U.S. Citizenship and Immigration Services. The newly naturalized citizens hailed from countries such as Mexico, China, Cambodia, Russia, Guatemala, and others.