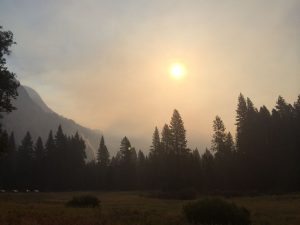 Smoke From The Meadow Fire

Yosemite, CA — There is five percent containment on the Meadow Fire in Yosemite National Park.

Yosemite Spokesperson Ashley Mayer says the fire is now estimated to be around 4,400 acres. There are 327 firefighters on scene, and eight helicopters.

It has been smoky in Yosemite Valley this morning, so anyone with respiratory conditions may want to think twice about heading into the park. Drift smoke has also been visible in surrounding counties.

Yosemite National Park is still open, and all roads are clear heading in and out of the park.