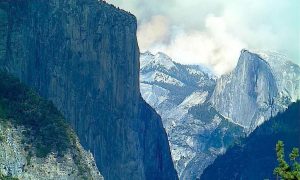 It is being called the “Meadow Fire”.  Park Officials say the flames were originally sparked by lightening on July 20th.

Park Spokesperson Jim Tucker says, “Firefighters have been monitoring the flames for 49 days. In that time, it grew to19 acres. However, a spark from that blaze has now ignited this larger fire.”

The flames were spotted by a reconnaissance helicopter this morning. Crews are battling the blaze from the ground and air. On scene are 7 helicopters, air attack, which includes Columbia air resources, and one hand crew.

Tucker says, “We are under full suppression efforts now with six Hot Shot crews heading to the blaze and another four on call for tomorrow.”

Smoke from the fire can be seen in the Mother Lode

A special thanks to community news partners Mike McEvoy and Alyson Lee Macon for sending in photos. Pictures can be e-mailed to news@clarkebroadcasting.com.

Update 6:15 pm: Ranger Kari Cobb now says it is not clear if the Meadow Fire was sparked by the earlier lightening fire. The fire started between noon and 1 pm.