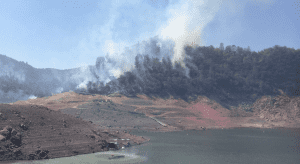 Moccasin, CA — Progress is being made extinguishing the Jackson Fire near Moccasin.

The fire remains around 60 acres and its 15% contained. There are still 19 engines on scene, nine hand crews, four air tankers, five water tenders, two helicopters, and three dozers. There have reportedly been two minor injuries to firefighters.

There are several structures in the area that firefighters are working to protect. There was briefly concern when a small spot fire jumped to the east side of Don Pedro, but it was quickly knocked down by air resources.

Jacksonville Road is closed at River Road, so you should avoid the area.

A special thanks to community news partners Mike McEvoy and Amanda Landrum for sending in pictures. Photos can be e-mailed to news@clarkebroadcasting.com.