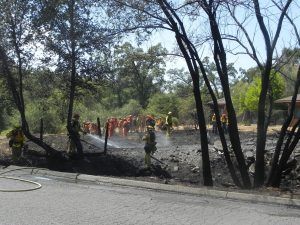 Sonora, CA — Firefighters continue to mop up after a two acre vegetation fire off of  Cabezut Road in Sonora. The fire burned close to, and prompted an evacuation of, the Hospice Of The Sierra building at 20100 Cedar Road. Across the road the Tuolumne County Public Health, and Department of Social Services buildings were also temporarily closed. The immunization clinic has been able to reopen and will remain open until 4pm. The WIC (Women, Infants and Children program) is also open.

Calfire Captain Mike Spear says, “The call came in at 12:23 we have two Tuolumne Calfire department engines, three Calfire state resource engines and mutual aid with the City of Sonora, two hand crews from Benbow which is in Santa Cruz. They are covering for us while our crews are in Mariposa.” Capt. Spear noted that the fire is contained, control is estimated to take until 3pm. Spear also noted that the planes (air attack and spotters) were coming back from the fire in Mariposa when the fire started. He says, “They were returning at the time and didn’t need to use any of their retardant.”

The cause of the fire is under investigation. A special thanks to our community news partners; Aubrey Self, Brent Mohr, and Michelle Fell.