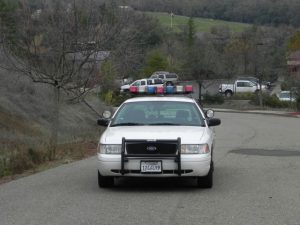 East Sonora, CA — A DUI/Drivers License checkpoint was conducted this weekend between 7:00pm and 1:00am on westbound Mono Way east of Fir Drive within the unincorporated area of Tuolumne County. Sonora Police and Explorers assisted officers from the Jamestown CHP office.

Of the 891 vehicles that went through the check point, 778 were screened. Officers occasionally chose to screen alternating vehicles to minimize the traffic delay. There was one DUI incident prior to the checkpoint that damaged property but caused no injuries. There were no arrests made at the checkpoint. Of the eight drivers cited for not having a license, six cars were towed, the other two found licensed drivers to drive them.

According to the National Highway Traffic Safety Administration “Checkpoints have provided the most effective documented results of any of the DUI enforcement strategies, while also yielding considerable cost savings of $6 for every $1 spent.” Christopher J. Murphy, Director of the Office of Traffic Safety says “Over the course of the past three years, DUI collisions have claimed 11 lives and resultd on 106 injury crashes harming 129 of our friends and neighbors.”