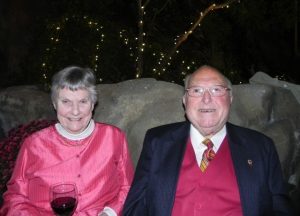 Sonora, CA — Dr. Harvey “Dusty” Rhodes, Columbia College’s founding president, passed away at his home in Phoenix Lake at the age of 96 on August 4th.

Dr. Rhodes received a special Leadership Award, Columbia College Foundation’s highest honor, in March 2006. Rhodes was inducted into the school’s Hall of Fame in 1990.
The Tuolumne County Chamber of Commerce Board of Directors honored Rhodes as the eldest Chairperson, he led the Board in 1972.

The Irving J. Symons Award was given to Harvey and his wife Patricia Rhodes in 2012 at Sonora Regional Medical Center’s Joie De Vie Gala. The award pays tribute to those, like Symons, who are longtime community leaders known for their generosity.

Rhodes served in the Navy during World War II and was in the Naval Reserves until 1970. He was an educator and education administrator until he retired from Columbia College in 1979.

A celebration of life is pending.