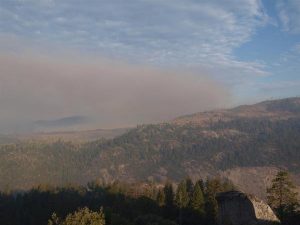 It originated in Yosemite National Park, but Yosemite spokesperson Ashley Mayer says the majority of the land burned is actually in the Stanislaus National Forest. The exact percentage is not immediately clear.

Firefighters are making progress, and the residents that were evacuated from the community of Old El Portal are now allowed to return to their homes. The evacuation order for Foresta is still in effect.

The nearby Black Hole Fire in Yosemite, which was caused by a lightning strike, prior to the El Portal Fire, is 580 acres and 5% contained. Both fires are being managed by the same Type 1 incident management team. It is a unified effort between Yosemite and the Forest Service. There are 640 firefighters on scene.

There remains no access to Yosemite Valley via Highway 120 due to a closure along Big Oak Flat Road in the park.