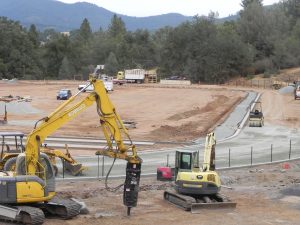 Superintendent Griffith says the state architects approved concrete stadium bleachers last Thursday. This Thursday, July 31st, a special Board Meeting will at 5:30pm. The Board will discuss a guaranteed maximum price for the concrete bleachers from Robert Boyer Construction.  Boyer was awarded the contract for the stadium and began construction on May 5th. The old bleachers have been removed and some soil preparation has been done. Griffith notes that the light poles are in and base rock for the track is going in this week. The track is scheduled to be paved next week.

Griffith says, “As far as football season, we have optional plans for the first two [home games] dates to be played away. If we can move that date up and play more of our schedule at home we will. Otherwise our first game will likely be, or could be, October 3rd.” He says the snack shack now has ADA compliant restrooms and the roof is completed.