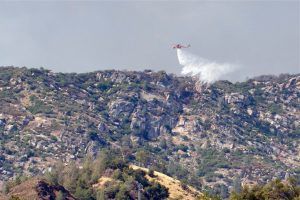 There is now 75% containment on the 3,800 acre Sand Fire burning near the Amador and El Dorado County line. 13 homes have been destroyed, as well as 38 outbuildings. Many residents along Sand Ridge Road were allowed to return back to their homes last night. 1,800 firefighters are on scene.

Meanwhile, the latest from Yosemite National Park is that the El Portal Fire is around 5% contained and over 2,600 acres. An updated size estimate is expected to be released this morning. There is also a separate, nearby lightning caused fire, known as the Dark Hole Fire, that is 585 acres. There remains no access from Highway 120 into Yosemite Valley, as Big Oak Flat Road is closed. The El Portal Fire is burning on both national park land, and in the Stanislaus National Forest.