Report Released On The Fire West Of Lowe’s 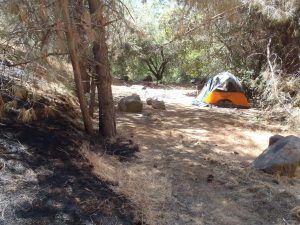 Sonora, CA — The Investigation into the fire which was started west of Lowe’s, on July 9 was released today. Sonora Police Department’s Fire Investigative Unit has identified Aaron Shermer, 27, of Sonora, as the person responsible for starting the fire.

Shermer admitted to Police that he started a fire, which burned over a quarter acre of grass and oak trees, that cost of over $4,500 to contain. During the investigation, it was discovered that Shermer was a resident of a homeless camp located at the origin of the fire. It was noted in the investigation that Shermer attempted to put the fire out, until it became too large and then he fled the area. Shermer is currently on probation for causing corporal injury to a cohabitant and has an extensive criminal history.

The report was sent to the Tuolumne County District Attorney’s Officer requesting a complaint be filed against Shermer for the felony of causing a fire. Shermer could be held responsible for the fire suppression cost of over $4,500.