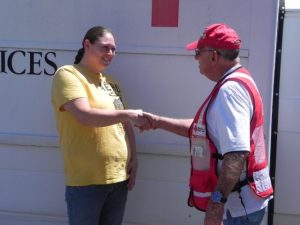 “Home fires are by far the most common disaster across the country, so it is critical that everyone take steps to prepare and help prevent these tragedies,” said Kathleen Weis, Chief Executive Officer of the Red Cross Capital Region. “Building awareness and taking action is key to reducing the number of fire incidents in our communities.”

Volunteers will be hitting the streets this Sunday in Calaveras County. They will continue knocking on doors through October and hope to reach more than 3,000 homes. Red Cross Officials say volunteers along with local fire officials will be canvassing neighborhoods that are considered “high-risk” for fire emergencies. They will work with residents directly to help them protect their home from fires.

Here is the Red Cross’ schedule areas and dates (subject to change):

In the next couple of months, Red Cross officials say they will be doing the same door-to-door campaign in Tuolumne County, but that schedule has not been finalized yet.