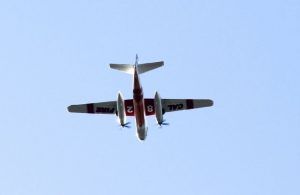 Copperopolis, CA – Cal Fire reports the blaze has been contained at five acres. Crews battled the blaze on Highway 4 near Main Street in Copperopolis from the ground and air. The flames broke out around 2:30 pm after a car pulling a trailer caught on fire. Cal Fire reports that when firefighters arrived on the scene, the trailer was fully engulfed. The flames were contained in about two and a half hours.