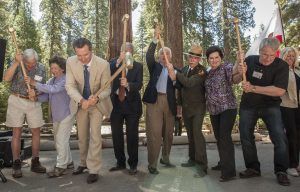 Yosemite, CA — In honor of the 150th Anniversary of President Lincoln signing the Yosemite Grant, the park held a groundbreaking ceremony for the Mariposa Grove Restoration Project.

NPS Director Jarvis stated, “On the 150th Anniversary of the Yosemite Grant Act, we stand in awe among these giant trees that are thousands of years old and are reminded about the importance of protecting our natural resources so that future generations can experience what John Muir called ‘nature’s forest masterpiece.’”