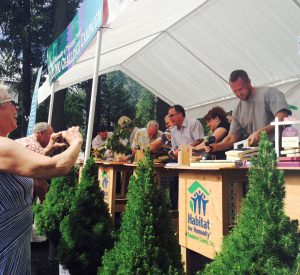 Sonora, CA — Construction projects can proceed on schedule thanks to generous support from local residents.

Habitat for Humanity of Tuolumne County was able to raise $96,500 at its 6th annual Habitat House Party. The event was held on June 21st at Immanuel Lodge in Confidence. It was hosted by Judy and Roger Haughton. Tuolumne County Habitat for Humanity Resource Development Manager Betsy Harden credits their efforts for raising the last $6,300 to meet a fundraising goal set in January. The 2014 Challenge Campaign goal was to raise $100,000 in six months to keep Habitat’s construction projects at Parrotts Ferry Village on schedule.

Harden says, “It was phenomenal! The generosity from beginning to end was just incredible.” Harden reports the event was attended by over 350 people. At the event eight live auction items and 40 silent auction items sold for a total of $31,000.

Harden reports that a duplex in Parrotts Ferry Village will be finished in August or September and the foundation for another will be started. The goal is to build two homes a year. When they are completed the newest homes will be the 9th and 10th homes provided by the Tuolumne County organization. To qualify for a Habitat house, a family must have an income that is 25-50% of the median county income.

Habitat for Humanity of Tuolumne County is an independent affiliate of Habitat for Humanity, International. Like International, HFHTC is dedicated to eliminating substandard housing. As an independent affiliate, they are responsible for obtaining their own funding for operations and to build homes. Harden says 80% of the money raised in the Challenge Campaign came from individuals.