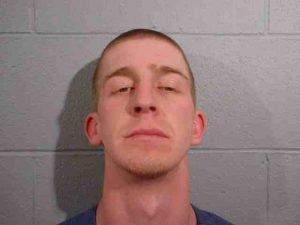 Arnold, CA — The Calaveras County Sheriff’s Office is investigating a case of three people attacking an Arnold resident and stealing items from his home.

The victim told Sheriff’s Deputies that 27-year-old Jimmy Blake Terry of Arnold, 28-year-old Phillip Ryan Coulson of Angels Camp, and a third unknown suspect came into his residence, and hit him with an unknown item.

The victim said Coulson then held him down, while Terry punched him. Coulson and Terry then took items from his home and cash from his wallet. Details regarding the incident are still under investigation. Terry was wearing an electronic ankle bracelet at the time of the crime. With assistance from the Probation Department, the Sheriff’s Office located and arrested Terry at a residence at 710 North Algiers Street in Murphys. Coulson was also on probation, and he was arrested without incident at the Day Reporting Center in the county. The third suspect remains at large. He is described as being an adult male, around 30 years old, with short slicked back blond hair.