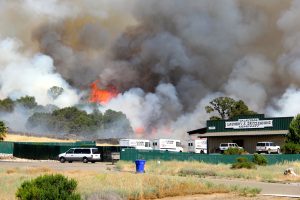 San Andreas, CA — Cal Fire reports a grass fire on the southside of San Andreas is 40% contained at 90 acres in size.

Nearly 30 structures are threatened at this time and residents have been evacuated. The evacuations are on Howell Road, Saddleback Road, and Magers Way.

The flames broke out in some grass around 4 pm on the 300 block of George Reed Road near Highway 49.  The smoke from the fire caused visibility problems on the highway prompting the CHP to shut down a section of the roadway from the old airport to Mountain Ranch Road. The highway was reopened in about an hour and officers are directing one-way traffic.

Firefighters continue to battle the blaze from the ground and air.  We will bring you more information as soon as it is available.

Click here for a map of the evacuation and fire site.

Update 6:20 pm:  Highway 49 is reopened. The CHP warns motorists to be aware of emergency vehicles still on the road during mop up and clean up.