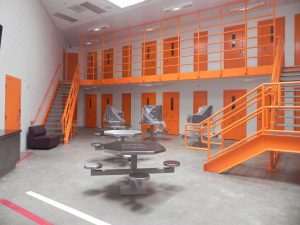 San Andreas, CA — The first inmates have been moved into the new Calaveras County Jail two months after the facility’s dedication ceremony.

Calaveras County Sheriff’s Spokesperson Sgt. Anthony Eberhardt says, “It started last Friday, roughly six inmates at a time were transported from the old facility to the new facility.  We concluded with the last inmate around 5 pm and that brought the end of the old county jail, which has housed inmates since 1963.”

Eberhardt says there nearly 70 inmates being housed in the new jail, which has the capacity for 160 beds, but only 80 will be open until more money is available for staffing.

In addition, on Monday the tunnel linking the jail to the new county courthouse was used for the first time as inmates were taken to courtrooms.