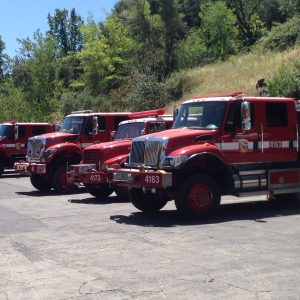 Coulterville, CA — Cal Fire has dramatically dropped the resources fighting the Haigh Fire now that containment has reached the 90% mark.  The fire remains 130 acres.  The number of firefighters was 330, but has now decreased to 82.  Tonight there are five engines and two fire crews still on scene. All aircraft and dozers have been called off.

Cal Fire Spokesperson Karen Guillemin says, “We have crews that continue to proceed with the mop up and line construction at the fire.  It was burning in the area where it’s heavy fuels, lots of brush so mop up is taking an extensive amount of time.”

Guillemin says they hope to have full containment by Saturday evening.  The flames broke out Tuesday after 3 pm.  What sparked the blaze is under investigation.  No structures have been damaged or destroyed and none are threatened.