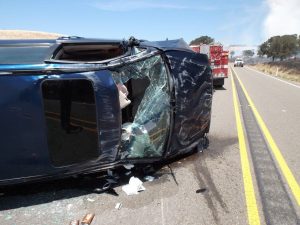 Tuolumne County, CA — The CHP has released the details of the crash that sparked a fire and has CAL Fire crews still battling a 287-acre blaze in Tuolumne County.

The CHP reports 65-year-old Sheila Monaghan was driving a 2001 Lexus at about 60 mph northbound on J-59/La Grange Road south of Old Don Pedro Road when she lost control of the vehicle on a curve and smashed into a large boulder. The car overturned and landed on its roof block the entire roadway.

Monaghan was taken by ambulance to Sonora Regional medical center suffering cuts to her arms and complaining of neck pain.  The CHP says alcohol and drugs are not a factor in the crash.