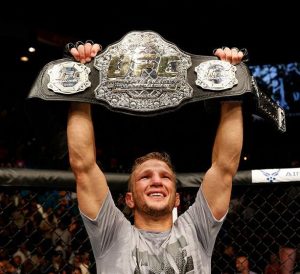 T.J. Dillashaw, who was heavily considered an underdog, dominated Renan Barao for the title in Las Vegas. Dillashaw, 28, was born in Sonora, but grew up in Angels Camp. He is a graduate of Bret Harte High School.

Being interviewed from the cage after the match, Dillashaw said, “I’ve been looking up to the guy (Barao) and felt respect to get in the ring against him. He’s the best in the world, and that’s what brought it out of me. I knew I was fighting the best, and I had to bring my A-game to be the champion of the world. And it happened baby! Calaveras County, Angels Camp, Sacramento, I love you guys!” Dillashaw’s victory speech was met with a roar of applause from the crowd.

Dillashaw was a 9-1 underdog in the match. Before entering UFC, Dillashaw had a successful wrestling career at Bret Harte High School and later went onto to wrestle at CAL State Fullerton.