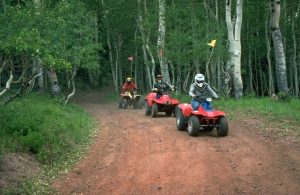 Sonora, CA — A settlement on motorized off-highway vehicle trails will require you to get a map so you do not break the rules.

The Stanislaus National Forest has settled with environmental groups on its motorized Off-Highway Vehicle (OHV) routes. The lawsuit was filed on behalf of the Twain Harte based Central Sierra Environmental Resource Council (CSERC), as well as the Wilderness Society, and the Public Employees for Environmental Protection in 2010.

The OHV plan was approved in 2009, and designated roads and trails that can be used by ATV’s and other off-road vehicles. It added 137 miles of trails that were previously off-limit. Those roads were the focus of the lawsuit, and in January of 2013 Judge Kimberly Mueller ruled that the changes implemented in the plan should have had more review.

Forest Officials says the agreement balances the plaintiffs’ concerns while retaining the majority of the OHV routes made in the 2009 decision for recreational use.

Forest Spokesperson Rebecca Garcia says, “On 40.34 miles of route, on three ranger districts, there are going to be some interim closures. That includes the Calaveras, Mi-Wok and the Groveland Ranger District. Some segments that are currently open are going to be closed. Some that are not open are going to stay closed because the mitigation work hasn’t been completed.”

Garcia recommends anyone wanting to use the trails stop at one of the three mentioned ranger stations to get an updated trail map.  You can also call the Stanislaus Supervisor’s Office at (209)-532-3671 or the ranger districts listed below.