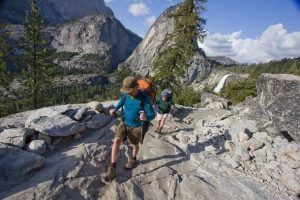 Yosemite, CA — A rock climber was killed after falling off a 400-foot ledge in Yosemite National Park.

The incident happened near the Liberty Cap Dome by Nevada Fall around 4 pm on Sunday.  Park Officials say they do not know exactly what caused 50-year-old Richard Copeland of Kings Canyon National Park to fall off the ledge.  A hiking partner had left Copeland on the ledge to go fill their water bottles.  When he returned, Copeland was gone.

Park Ranger Kari Cobb says, “The partner went down to the basin of the dome and saw him approximately 300 feet below the ledge. By the time his partner made it to Copeland, he was deceased.”