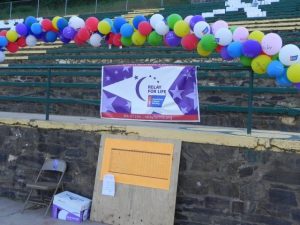 “It was a very exciting and enthusiastic weekend,” says Mary Freer, event Chair. “Some teams are still doing fundraisers, and our anticipation is that we will have raised $75,000 by the end of August.”

This past weekend’s event had 22 teams, which were typically made up of about 8-10 people. It was held at the track at Sonora Elementary School. This year’s event had to be somewhat scaled down due to the smaller venue. Sonora and Summerville High Schools were not available due to planned bond projects. Last year’s event had over 40 teams and raised around $108K.

Freer says the enthusiasm remained just as high this year among the participants that took part. This year’s Survivor of the Year award was given to Amelia Harrison. She has been a team captain for several years, a member of the organizing committee, and is a five-year cancer survivor. The individual that raised the most money was Mark Levering who collected $2,584. The youth that raised the most money was Carly Ecroyd of Sonora Elementary who brought in $265.