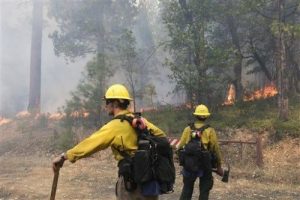 San Andreas, CA — The Tuolumne-Calaveras Unit of Cal Fire is paying it forward. Just as firefighters from southern California came up to assist in the Rim Fire, crews are headed down to San Diego to assist in the blazes roaring there.

Cal Fire Spokesperson Nancy Longmore says, “We’ve sent approximately 30 to 40 firefighters on engines, so we’ve sent ten engines. We’ve also sent three strike teams of inmates down there, which is two crews per strike team for a total of 85 people.”

Longmore says the teams took off yesterday and will be working on the Cocos Fire in San Diego County and the Miguelito blaze in Santa Barbara County.  However, she says they could be reassigned to any one of the nine fires burning in the area. There is no word on how long they will be working on the fires. The flames have caused more than $22 million in damage to date.