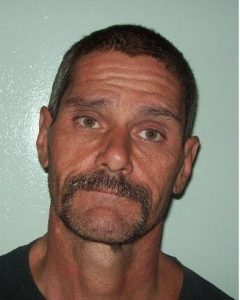 Sonora, CA — A man wanted by the Sonora Police Department, on firearm related charges, has been arrested in Tuolumne.

As reported last month, 49-year-old Dean Bennett was wanted by authorities on suspicion of selling stolen guns. Officials searched a home on Birch Street last month in hopes of finding Bennett, but he was nowhere to be found. Authorities did, however, find firearms and methamphetamine.

The Tuolumne County Sheriff’s Office learned that Bennett was back staying at the home on Birch Street in Tuolumne, so last night officials surrounded the home for approximately a half-an-hour until Bennett came outside.

After taking Bennett into custody, officials searched the home and found a sawed off shotgun with a sling full of shotgun shells, a walking cane concealing a knife, a large amount of ammunition, methamphetamine, and glass methamphetamine smoking pipes.

58-year-old Janice Ednes was also arrested at the home for harboring Bennett.