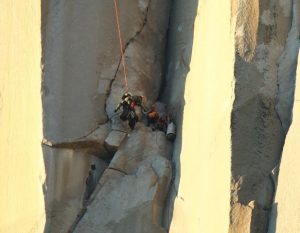 Yosemite, CA — Several Yosemite Park employees were given national honors for their bravery and valor.

Those employees were recognized and honored for their courageous efforts during a complex and technical rescue operation on El Capitan in September 2011. The Valor Awards were handed out this week in Washington D.C. to Rangers, Jeffrey Webb and David Pope, and two Helitack Crewmembers Eric Small and Jeff Pirog.  Richard Shatto, a private contract park helicopter pilot, was also honored with a Citizen’s Award for Bravery for his expertise in piloting the helicopter.

“The work of these Yosemite employees, along with the helicopter pilot, exemplify professionalism and quick, strategic thinking in a rapidly changing and dangerous environment,” stated Kevin Killian, Yosemite National Park Chief Ranger.  “I am extremely proud of the work of these individuals and am elated that they are receiving this distinguished recognition.”

On September 26, 2011, the Yosemite National Park Emergency Communication Center received a call reporting a climber fall on the Nose Route of El Capitan.  A lead climber had fallen and a rope severed his thumb.

“What made this helicopter rescue so amazing,” explains Ranger Kari Cobb “was that the team was fighting against daylight.  One of the crewmembers was able to make it over to the injured climber and successfully pull the climber off the wall.  It was actually done in time for him to get his thumb sewn back on and he has full capabilities of his hand.”

Park Officials say the Valor Award was established in 1957 to recognize an employee’s demonstration of unusual courage involving a high degree of personal risk in the face of danger.