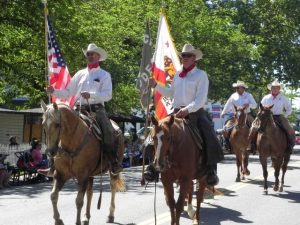 The Tuolumne County Sheriff’s Posse reports that the parade will get underway at 10am. The parade is typically viewed as an unofficial homecoming for the community. Sonora Police Chief Mark Stinson’s advice is to “arrive early.”

Below is the list of street closures and other pertinent information as provided by the Sonora PD:

South Washington Street at State Highway 108 will be closed at 8:00 am.

North and South Washington Street will be closed at 9:30 am.

Stockton Road at Green Street will be closed at 9:30 am.

Snell Street at Bonanza Street will be closed at 9:30 am.

School Street between Washington Street and Snell Street will be closed at 9:00 am.

If you are planning on attending the parade, the Sonora Police Department encourages you to arrive around 9:00 am to save yourself some aggravation and allow you time to find parking.