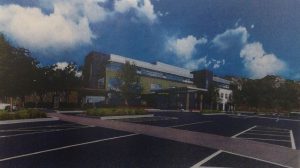 Sonora, CA — Adventist Health has agreed to fund $26 million of Sonora Regional Medical Center’s future Outpatient Pavilion, which will be anchored by a new Cancer Center.

SRMC submitted a proposal to the Strategic Capital Committee for Adventist Health requesting support for the project. Gail Witzlsteiner, SRMC Director of Development and Public Relations, says 20 projects were submitted within the Adventist Health network, and the Outpatient Pavilion was one of two approved.

SRMC’s total project is estimated to be $36 million. “The rest of the money will come from strategic capital that the hospital has in reserves, and also a fund-raising campaign where we will reach out to the community for support,” says Witzlsteiner. “We’re looking to raise $3 million from our community to help build and house the new Cancer Center at the Outpatient Pavilion.”

Details regarding the fundraiser are still being formulated, and more information will be released at a later time. The Cancer Center will be located where the former Andy’s Hardware building currently sits. Witzlsteiner says SRMC hopes to break ground sometime later this year.