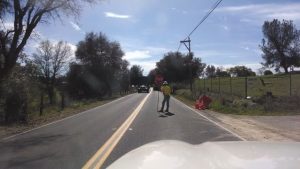 Sacramento, CA — If you do not slow for cone zones you are putting yourself at risk. As the temperatures heat up, motorists will also see more cone zones popping up along California highways. Caltrans wants to remind the public to take precautions when construction crews are on the roadways as it can be deadly.

“It’s very dangerous,” says Tamie McGowen Caltrans Spokesperson, “On average 1,000 Caltrans vehicles are struck each year. Drivers and passengers account for 85 to 90 percent of the people who are killed in highway work zones.”

Caltrans reports most of these fatal crashes are rear-end collisions.  The common factors involved in the wrecks are speed, aggressive and distracted driving. Caltrans reminds motorists to slow for the cone zones or vehicles with flashing amber lights.

Also at risk are Caltrans workers, 183 employees who lost their lives on the job were honored at the 24th Annual Workers Memorial in Sacramento earlier this week.

McGowen says, “It is one of the most dangers occupations in the United States. The risk of death is seven times higher for highway workers than the average worker.”

This year alone, crews are working on 600 projects across the state at a cost of $11.2 billion dollars.