New Queen Will Be Crowned 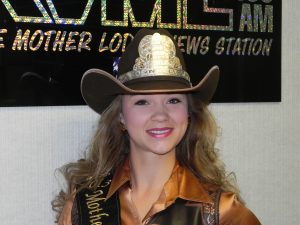 The Queen Horsemanship competition will start at 10am tomorrow at the Mother Lode Fairgrounds. The event is free and open to the public. Then at 5pm on Sunday will be the Pageant at the Sonora Opera Hall. There is a $10 entrance fee.

“The whole four months, that they’ve been spending so much time and effort, is boiling down to this one night on Sunday,” says Lorna Job, 2013 Mother Lode Roundup Queen.

The Queen Pageant the first major event that will kick-off Roundup week. Find out about all the events in the myMotherLode.com Mother Lode Roundup section.