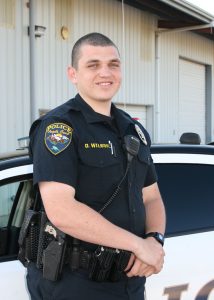 Angels Camp, CA — He only has a year under his belt, but this rookie is making waves.

Angels Camp Police Officer Darien Wilson is the recipient of the Angels-Murphys Rotary Club’s Officer of the Year award for 2013.  The Department hired Wilson in January of 2013. Wilson led the department in arrests for the year, which included 59 for driving under the influence (DUI). Those numbers also recently gained him recognition by MADD, Mothers Against Drunk Driving, and the California Office of Traffic Safety. He, along with 80 officers in the state, were honored at a ceremony in Ripon this month to thank them for their DUI enforcement efforts.