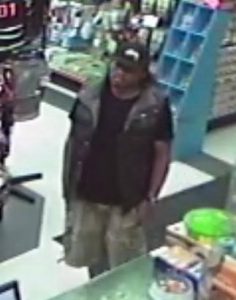 Sonora, CA — The Sonora Police Department has released photos of the suspects in a pet store burglary.  As reported earlier, two men entered Tia’s Tubs and Toys located at 716 Mono Way on April 15 around 3:15 in the afternoon.  While one of the suspects distracted the employee, the other stole 16 packages of flea medication worth $960.

The incident was caught on the store’s surveillance cameras.  Sonora Police Chief Mark Stinson says, “The quality is not great, but the photos are being released in hopes someone may be able to identify them.”

If you do recognize either suspect, you can call the Sonora Police Department at 209-532-8141. Stinson says he believes the suspects are from outside the Sonora area.