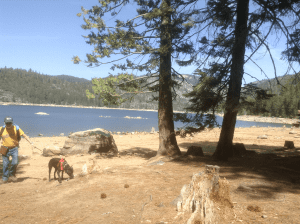 Los Angeles, CA – Governor Jerry Brown has issued an executive order to “redouble State drought actions” and calls on the public to step up its efforts to cut water usage.

“The driest months are still to come in California and extreme drought conditions will get worse,” said Governor Brown. “This order cuts red tape to help get water to farmers more quickly, ensure communities have safe drinking water, protect vulnerable species and prepare for an extreme fire season. I call on every city, every community, every Californian to conserve water in every way possible.”

The Governor’s order directs the Department of Water Resources and the State Water Resources Control Board to expedite approvals of voluntary water transfers to assist farmers.  It requires the California Department of Fish and Wildlife to accelerate monitoring of drought impacts on winter-run Chinook salmon in the Sacramento River and its tributaries, and to execute habitat restoration projects that will help fish weather the on-going drought.

The Governor’s Offices says, in response to the increased threat of wildfire season, the order streamlines contracting rules for the Governor’s Office of Emergency Services and CAL FIRE for equipment purchases and enables landowners to quickly clear brush and dead, dying or diseased trees that increase fire danger.

As reported earlier, the Governor has already called on Californians to reduce their water usage by 20%. This new order calls on all Californians to step up their efforts to conserve water.  Asking them to avoid wasting water, including limiting lawn watering and car washing; recommending that schools, parks and golf courses limit the use of potable water for irrigation; and asking that hotels and restaurants give customers options to conserve water by only serving water upon request and other measures. The order also prevents homeowner associations from fining residents that limit their lawn watering and take other conservation measures.

The order also enacts a limited waiver of the California Environmental Quality Act for some state actions that will remain in effect through the end of 2014.