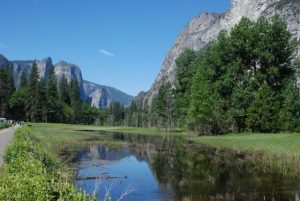 Yosemite, CA — A rock climber at Yosemite National Park was rescued by helicopter after falling 30 ft. and suffering major injuries.

The Associated Press reports that the unidentified 26-year-old man from Palo Alto was climbing with a partner Sunday on the park’s Cathedral Range. The CHP flew a couple of Yosemite Search and Rescue specialists to the injured climber. The CHP helicopter took the man to the El Capitan Meadow, where he was transferred to another helicopter that took him to Memorial Medical Center in Modesto to treat his injuries.

This was the second helicopter rescue in Yosemite within the past two weeks.